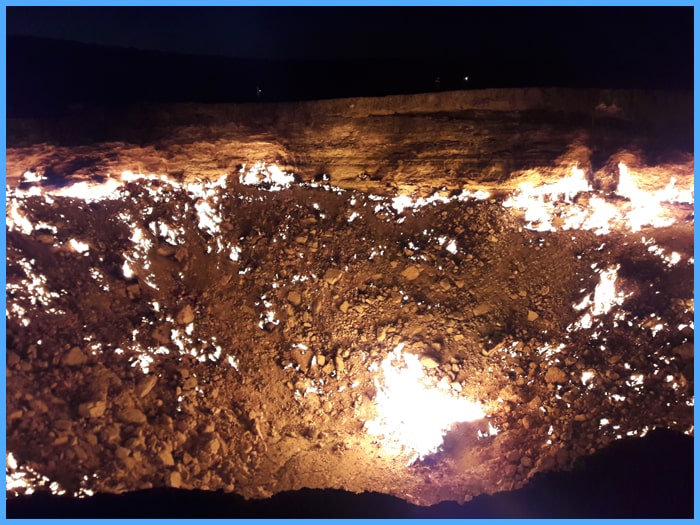 Day 1: Ashgabat
Upon arrival you will be met and transferred to a hotel. You will spend night in the hotel.

Day 2: Ashgabat - Turkmenbashi
In the morning you will have domestic flight to Turkmenbashi. The tour will start by visiting the Yangykala canyon. The road to this sigh will take 170 km and 3 hours to drive. You will learn that the name Yangykala the meaning of which "fire fortresses" from Turkmen suits it. Here you will be able to enjoy its fairy sheer cliffs of white, yellow, ocher, purple and red colors that appeared due to the winds and rains resemble the stone castles from a fairy tale. In addition you need to see this place during sunset then you will see the incomparable beauty of canyons. During the tour you will be impressed by the red hot color that covered all here. Drive back to the Turkmenbashi city. Night is in the hotel.

Day 3: Turkmenbashi - Mary
In the morning you will fly back to Ashgabat. Upon arrival in course of the travel you will drive to the Gokdepe village. There you will have an opportunity to explore the horse farm and observe the ride of Turkmen people - Ahalteke horses. Here you will be able to enjoy the famous horse riding skills on Ahalteke horses.  If you have riding skills you it will be allowed to ride on this breed. Then you will drive back to Mary province via Ashgabat.  During the travel you will have an opportunity to visit Abiverd fortress. The ancient settlement Abiverd is one of eight historical reserves of Turkmenistan along with Kunya-Urgench, Nisa, Merv, Dehistan etc. Night is in the hotel.

Day 4: Mary - Merv - Mary
In the morning you will drive to ancient Merv. The first information about this city was found in Avestian chronicles of the 8th -6th centuries B.C. There was description of this city by using vivid epithets "the soul of the king, the mother of the cities of Khorasan and the city in which the universe is located". This pale is interesting due the fact that it was place where lived Omar Khayyam, As - Samani, Imamaddin-Isfahani and other great thinkers of the Middle Ages. Here you will be impressed by the fact the there are at least five ancient settlements - Erk-Kala, Gyaur-Kala, Sultan-Kala, Abdullahan-Kala and Bayramalikhan-Kala. Unfortunately not much were saved furthermore the most of them look like sagged hills. Even so it is one of the greatest historical monuments. In course of the tour you will visit the national museum of Mary city as well as the local market where you can buy souvenirs or other stuff. Night is in the hotel.

Day 5: Mary - Margush - Ashgabat
Toady you will visit Margush. This place used to be prosperous ancient kingdom in the Mary region that existed 5 000 years ago.  The people who lived here were famous due to being  jack of all trade. And their main occupation was agriculture. Moreover thy had their own written language. Thus, the historian proved the existence of this center of ancient civilization, as well as India, Egypt, Mesopotamia and China. Return to Ashgabat. Overnight is in the hotel.

Day 6: Ashgabat - Kone Urgench - Darwaza
Your day will start by having flight to the Dashoguz region. Upon arrival in course of the tour you ancient Kone-Urgench. You will explore one of the main sights of Turkmenistan. Here you will be able to find a lot architectural masterpieces as well as the minaret, which is one of the oldest of its kind in the world. At the ancient time this place used to be calling Gurganj. It was located in the Dashoguz velayat in north-western Turkmenistan, on the left bank of the former Amyderya River.  Moreover it was the capital of the Khorezm region that existed in 6th - 7th centuries BC and the early Achaemenid period. This palce had advantagedue o its location on the crossroad of two major caravan routes: west to east from Europe to China and from the south to the northwest to the Volga River. After it you will drive to the famous Gas Crater or Gate of the Hell. This place will impress you by the incredible view of flame. Despite being very popular on tour to Turkmenistan not many people know the how this place appeared. Usually to have better view the tours to Gas Crater organized for the evening time, so you will enjoy a fascinating view of the sunset that slowly opens up vividly burning flames of the crater. Night is in the tent.

Day 7: Darwaza -Ashgabat
In the morning you will return to Ashgabat. You will arrive to hotel to take a rest. The second part of the day is dedicated to explore the sight of the tour. You will drive to Old Nisa the road to which takes 18 km west of Ashgabat. The runs of Old Nisa used to be the capital of ancient Parthia. This Kingdom existed at the turn of the 1st millennium BC and the 1st millennium AD. During the time in the III century BC New Nisa started to be the capital of Parthia while Old Nisa became the imperial residence.  Next destination of the tour is Russian Bazaar. This popular place appeared in 1972-1982 by the design of the Russian architect Vladimir Visotin. This was the product of the "Ashgabat Reconstruction Program of 1970-1980". The design was made in Soviet Modernism style and decorated by the Turkmen sculptor Klych Yarmamedov. He loved abstract building due to it the sculpture was placed in one of the building's corners. This sight is popular is not only by local but by foreign delegations too. Moreover here you can be find practically everything. The Turkish company Ekol reconstructed this place in 2001. The complex was covered with white marble. In 2007, there was a fire in the clothing section of the market.

Day 8: Ashgabat - Jygyldyk bazaar - Seyitjemaleddin Mosque - Ashgabat
In course of the travel you will visit Jygyldyk bazaar. This place is one of the best sights of eastern tradition. To trade here you should know the art of bargain. Here it possible to find everything that you want. Due to this the famed Turkmen carpets can be easily find. The carpets that are produced here is the pride of Turkmens.  After it you will drive Anev village where you can explore the mausoleum of Seyitzhemallleddin. At time of the reign of Abu l-Kasim Baber Bahadurkhan this mosque was built in 1456 due to the inscription on it. The vizier of Bahadurkhan Muhammad Khudaydot constructed it and even found the place to build next to the grave of his father, Sheikh Jamaleddin, a native of Anau. But Sheikh Jamaleddin was never mentioned in Sufi sources until the 15th century. But academician G.A. Pugachenkova studied the inscriptions on the face of the mosque, suggested that the ambiguous nature of the language, the author of the lines managed to perpetuate her father. He took the first part of his father's name - "Jemal" (that is, beauty) - and used it in the phrase "Dor-ul-Jamal", which has two meanings: "house of beauty" and "cloister of Jemal". Night is in the hotel.

Day 9: Flight
In the morning is transfer to airport.

Note: Each Traveler should have 2 photos (5×6) to be presented at the points of entry.