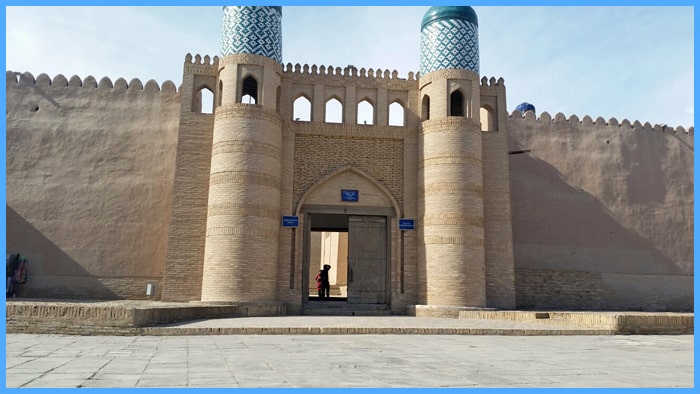 Day 1: Tashkent
Driver will pick you up and accompany to Tashkent to have a city tour. While having a tour you will enjoy the most interesting and major attractions of the city. The tour will start with visiting the main square of the country that was erected as a symbol of victory in WWII. Then you will explore the local Broadway. It is the street that separate the independence square and Amir Timur square. In addition you will be able to have a ride in the famed Tashkent subway the first line of which was opened in 1977. After it the tour will be in the old part of the city where you will explore: Chorsu Bazaar, Kukaldash Madrasah and Hast Imam complex that consists of several madrasahs, mosques and mausoleum. The highlighted part of the city tour is the world's oldest Quran copy of 8th c. Quran belonged to Othman Ibn Affan, the Third Caliph. Othman was killed by non-muslims in 8th century. Even now you can find hs blood  on the pages in Quran. Overnight is in a hotel.

Day 2: Tashkent - Chimgan Mountains - Tashkent
Toady you will drive to Chimgan Mountains. You will have a great time to observe the breathtaking view while have a ride in chair lift to the top to see Beldersay peak. The ride takes 30 min upon arrival you will be gifted by the picturesque scenery of the nature. On your free time it will be possible to explore this place and relax on the beach of Charvak Lake. Depending on the season you can even swim there. This lake is manmade and has a great popularity among locals and neighboring countries. In the end of the day is return to Tashkent. Night is in a hotel.

Day 3: Tashkent - Termez
In the morning you will have a flight to Termez. This city is one of the oldest in Central Asia due to it you can witness the numerous cultural layers depicted in the remains of historical places. But most of the historical architecture was destroyed by Genghis Khan in 1220. But the city was restored on the east part of the old town. During the travel you will have a great chance to explore the significant sights like: Archeological museum, Fayaztepa, Mausoleum of Hakim at Termezi, Buddhist Stupa Zurmala, Mausoleum Sultan Saodat, Honako Kokaldor Ota, Nunnery Kirk Kiz, Jarkurgan's Minaret, Dalverzintepa archeological dig. It also should be noted that some of them might be closed and the military trainings is reason for it. At the end of excursion is transfer to hotel. Overnight is in a hotel.

Day 4: Termez - Shahrisabs - Samarkand
In course of the travel you will visit the place where Amir Timur was born - Shahrisabs. Upon arrival you will have to explore the most important attractions of the city. The first sight is the Ak Saray Palace that was built by the order of Amir Timur. You will be impressed by this piece of art that have the plum of greatness and majestic view. You will find the inscription on main gate that says: "If you want to know about our power, look at our buildings". Then is the building that was built in honor of the eldest son of Amir Timur - Jahongir mausoleum. He died in battle when he was twenty years old. Amir Timur had a deep grief of the death of his son. Then you will explore other sites that are not inferior to those two: memorial complexes Dorus Siadat and Dorus Tillavat. They are famous due to the fact that all descendants and relatives of Amir Timur were buried there. After excursion, you will continue the drive to Samarkand. Overnight is in a hotel.

Day 5: Samarkand - Bukhara
Toad you will explore the second largest city of Uzbekistan that is located in the valley of the river Zerafshan. Samarkand is as old as the cities of Babylon or Rome. During the tour you will have great opportunity to see the main and most visited sights of the city such as Registan square, Shakhi-Zindeh, Mausoleum Guri Emir and Bibi Khanum Mosque. At first you will observe the attraction of the 15-17th century - Registan Square. It is made of three impressive madrassas. You will not hold yourself to not admire this incredible attraction. After it you will have a chance to see huge collection of mausoleums - Shakhi-Zindeh, the complex of 11th-15 centuries. It is listed to UNESCO World Heritage Site. And last one for today is famous Bibi Khanum Mosque that was built to Tamerlan's favorite wife after his success in India. Overnight is at the hotel. Returning back in evening and night is in a hotel.

Day 6: Bukhara
Today you will explore the Bukhara city. Bukhara is very old city has remains of the ancient architecture on its territory. And the first sight that we will visit is Citadel Ark of 4th century that is considered to be the oldest of its kind in Uzbekistan. This sight served as palace for some dynasties of Bukhara Empire.  After I you will observe the Samanids mausoleum that is the architecture art of 9th -10th century. Chashma Ayub or job's well and Bolo-Hauz mosque are one of the beat example of the remains in Bukhara. This mosque also known as forty columns built in honor of Bukhara governor Abu-Fayud Khan. After it you can explore the shopping domes as well as see Nodir Divan Begi, which is also a part of Lyabi House Ensemble. Due to the incredible façade of the madrasah many people want to witness it. Moreover you will have a chance to explore the unique example of architectural art - Poi Kalon complex, that was made of three structures built in the 12th - 16th centuries: Kalon minaret, Kalon mosque and Mir Arab Madrasah. Night is in a hotel.

Day 7: Bukhara - Khiva
Toady you will have a tour to the most ancient city of Uzbekistan due to this you will be able to enjoy the sights full of mystery and great history. This city is related to the legendary Khorezmshah's State with its capital in Urgench before. In ancient time this place was one of the main trading centers on the Silk Road in 10th century. Endless caravans passed to China and back here as well as rested in this city. The most part of the city was saved and preserved though generations. During the drive here the road goes via Kizilkum desert that lays from Bukhara to Khiva. In addition it will be possible to witness Amu Darya river, the deepest river in Central Asia, made by the fusion of the Panj and Vakhsh in Tajikistan. The rivers flow into Aral See. After arrival in Khiva you will have free time. Night is in a hotel.

Day 8: Khiva - Tashkent
In course of the tour you will have a great time while visiting the most interesting sight of Uzbekistan. Toad it will be the inner city - the famous Ichan-Qala. This sight had strong walls as well as many centuries' old sound buildings, palaces, mosques, Madrasahs, Mausoleums, Minarets, Caravan-Sarais and Bathhouses. All of this that is located in it made Ichan-Qala into unique city-monument. Here you will be able to explore over 400 traditional houses and about 60 architectural monuments. In 1969 this attraction became historical and architectural conservation area. Here it will be possible to enjoy the most popular Kunya-Ark fortress of 17th century found by Muhammad Arang Khan, Kalta Minor minaret and Tash Khouvli palace, an incredible example of Khorezm architectural mastership of 1830s. Evening flight to Tashkent. Night is in a hotel.